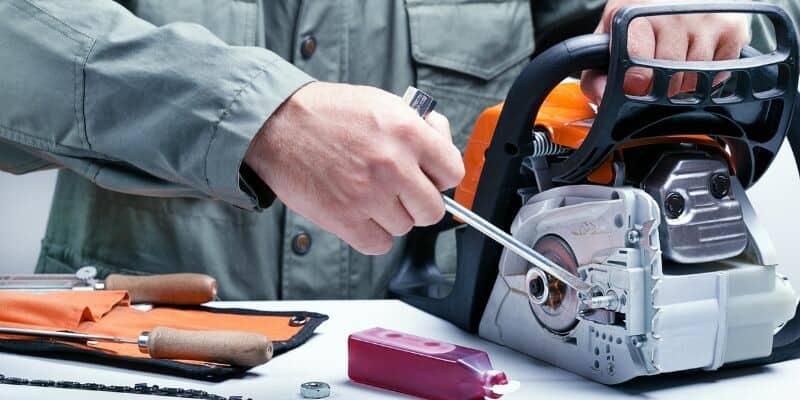 Are you a newbie chainsaw user, and you’re confused by how to adjust the chainsaw carburetor because you don’t know how to? If so, then this is definitely the right place to be.

Adjust the carburetor of your chainsaw

A carburetor is an important component for the proper and efficient working of a chainsaw. It helps ignite the engine by mixing a certain amount of fuel with a bit of air. However, it becomes filled with carbon in case too much air enters and gets mixed with the fuel.

The fuel will not be able to power up the chainsaw with full power. In this situation, smoke gets produced, which leads to the accumulation of carbon. Hence, you will have to tune the carburetor for better functioning of your chainsaw. But you’ll first need to know about the parts of the carburetor for proper adjustment.

The idle speed screw will determine the extent to which the throttle valve can be opened. This valve comes in the shape of a butterfly. The other name of this is throttle speed, and it’ll work with the release of the throttle trigger.

This adjustment must always be at its optimum limits. In case the idle speed is too low, the engine of this chainsaw can die quickly after the release of the throttle trigger. If it is too high, the chain will start running due to the working of the centrifugal clutch.

The high-speed adjustment controls the cutting speed by mixing air and fuel, which can make it the critical adjustment in a battery-powered chainsaw. The chainsaw will be at its optimum RPM speed when this adjustment is normal.

If the adjustment is too high, the chainsaw will not have the needed RPM level for providing maximum power. In case it is too low, there’s a risk of bearing failure and cylinder seizure.

How to adjust chainsaw carburetor

A carburetor is a unique but important component of a chainsaw that regulates the amount of gas consumed by the machine. This portion of the chainsaw should be tuned correctly, or else your machine can malfunction and become difficult to operate. Not taking proper care of it could eventually destroy the engine, which is why adjusting/tuning must be done with extreme caution.

Many chainsaw owners aren’t aware of maintaining their equipment properly, although it has been one of the most widely used tools in the United States for decades. They are often unaware that the carburetor can be adjusted to accommodate different types of wood or fuel sources. Why and how you need to adjust the chainsaw carburetor will play a key role in engine performance. Changing the carburetor can assist diagnose problems with your chainsaw and guarantee better engine efficiency.

Check the exhaust port and muffler for any potential carbon build-up. Carbon clogging the spark arrestor screen or exhaust port can easily cause a chainsaw to run as if the carburetor needs adjustment. Changing the carburetor settings with a blocked muffler might result in the chainsaw running too lean when the carbon build-up is cleaned out. You need to ensure that the spark plug isn’t carboned up.

If the carburetor adjustment is needed due to a new or rebuilt carburetor, it’ll be the best option to begin with fuel adjustment settings one turn out. This can be accomplished by gently screwing the adjusting screws onto their seats before turning anti-clockwise one turn each. You should take proper care when screwing them onto their seats, as the seat might be easily damaged if the adjustment screws are screwed in too tight. The seats are quite delicate and if they get damaged, the carburetor might need to be replaced entirely.

Start the engine and let it warm up properly. If the chainsaw is idle, allow it to run for a few minutes. If it isn’t able to maintain idle without stalling, then warm it up by repeatedly squeezing the throttle. Remember that you do not run the throttle too wide open. Carburetor adjustment made on a cold engine can be too rich when it ends up reaching normal operating temperature.

Now, you need to start by setting the idle screw (screw A). You should look to set the speed at around 2700 RPM. If you haven’t got a tachometer, you should try to set the speed such that the chainsaw idles as high as possible without engaging the clutch. Remember that you don’t set the idle such that the chain runs when the throttle is released. If the chainsaw does not idle, you should move to the next step.

Now, you should set the low-speed fuel adjustment. You need to slowly turn in the screw (L) clockwise until the engine surges or starves for fuel. Remember to take a mental note of the position of the screwdriver. Slowly turn the adjustment screw out (anti-clockwise) and the engine will run better.

You should keep turning the screw until the engine begins to splutter and oil up. Make a note of the screwdriver’s position and compare it to the position of the lean adjustment. Slowly turn the screw in clockwise to a position where it’ll idle the best. It should be around midway between the rich and lean settings.

Return to Step 6 and reset the idle speed. Chances are that the RPM settings have changed since you’ve optimized the fuel mixture adjustment.

You should set the high-speed fuel adjustment. Hold the trigger wide open before adjusting the high-speed screw (H) anti-clockwise until the engine begins to 4-stroke or misfire slightly. Also, remember to take a note of the adjuster position as it is running too rich.

After that, you should adjust the carburetor lean (clockwise), which causes it to sound smoother. Then, it’ll begin to starve of fuel, creating a little power, and a large amount of heat. As you back it off from lean to rich again, the sound will become slightly rougher. This slightly rough sound or the 4-stroking sound is where you want it to be. This is as close to smooth as it can get, but still slightly into the rough.

Setting the adjustment a bit rich will reduce to “no-load” max RPM, but it’ll allow the correct full-load air/fuel/oil mixture and hence reduce the possibility of damage to the engine.

Check that the low-speed adjustment is still working just like before you adjusted the high-speed jet. Changing the adjustments on one jet can affect the other slightly. If the acceleration isn’t as rapid as before, return to step 7.

You should set the final idle speed (Step 6). This time, try to turn the idle speed screw anti-clockwise to the lowest RPM where the chainsaw will idle smoothly without seeming as if the engine will stall. Your chainsaw has now been correctly adjusted and is ready for work.

Benefits of adjusting the chainsaw carburetor

Another key stage that chainsaw owners and enthusiasts should know about is tuning a carburetor. The fuel injector controls the amount of air and gasoline entering the engine, allowing it to run properly. A chainsaw tune-up can make the chainsaw run smoothly and efficiently.

Lean running or poor speed is among the most common issues that chainsaws face. Lean running can reduce the power of your carving chainsaw, while also causing pre-ignition.

This situation can cause the engine to leanly operate, and it can be caused by a variety of conditions or circumstances like –

Your engine might have problems almost pouring out of the muffler if it is running rich. The fuel mixture can contain too much environment and not enough petrol in the engines. It causes fast-moving smoke to emerge from the muffler or exhaust system. This will result in halting or sluggish performance. Among the different situations, these can cause abundant running –

4. Engines having two and four strokes

Gas-powered chainsaws have two types of engines – four-stroke and two-stroke. In the case of a two-stroke motor, it’ll be critical to understanding that you must utilize a gasoline and oil mixture if you want to get your chainsaw up and running. For four-stroke engines, the engine isn’t required to mix gas and oil to function smoothly.

What tools will you need for carburetor adjustment?

The tools needed for carburetor adjustment are – a screwdriver, a socket wrench or crescent wrench, gasoline line pliers, and an Allen wrench.

How often should the fuel mixture lines and air filter be inspected?

Usually, it is recommended that you should examine the fuel mixture lines and air filter after every 24 hours of use, or after you dump the tank to keep the chainsaw well maintained and in a wonderful operating condition. Cleaning these components can easily improve the engine speed performance while helping your chainsaw last longer.

What are H and L on carburetor adjustment?

The letters on the chainsaw carburetor screws represent High (H), Low (L), and Idle (T). The “H” screw is used for regulating the Air/Fuel mixture during high RPMs, whereas the L screw does the same during low RPMs. The T screw will regulate how much fuel gets sent to the carburetor while idling until the throttle is pressed.

How to know if your carburetor needs adjusting?

The engine must rev smoothly and quickly as soon as you start applying throttle. If your chainsaw is displaying any sort of sluggish performance or misfires when you’re applying the throttle, then some more adjustment is needed.

ALSO READ: How Much Does Chainsaw Cost On Average