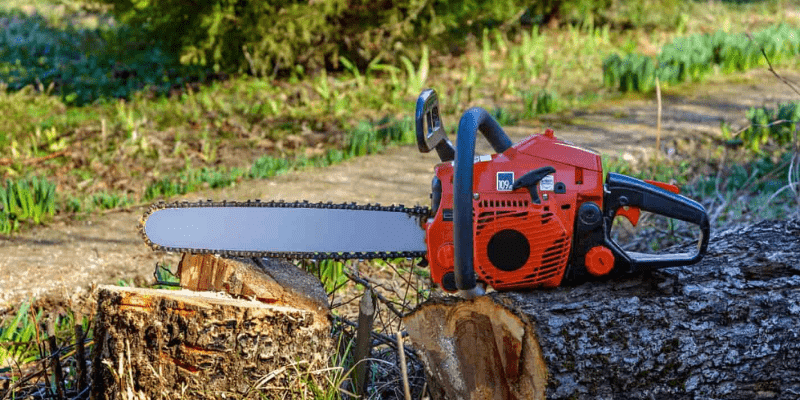 Injuries are more common in chainsaws than people may think. Every year, thousands of people get injured due to simple chainsaw accidents. However, knowing how to avoid such common injuries will greatly reduce the chances of getting injured. This guide will let you know all about the common chainsaw-related injuries and how to avoid them.

Common chainsaw accidents and how to avoid

Knowing how do most chainsaw accidents happen will give you a great idea of what not to do to end up getting injured. There are many common hazards that are regularly seen in not just the professional industry but also in your backyard.

There are three most common types of injuries that occur when operating a chainsaw – noise, vibration, and cuts.

The exposure to the incredibly high level of noise that is emitted by a chainsaw, especially over an extended period of time, can lead to mild or even severe hearing loss.  A chainsaw runs at a sound intensity of about 109dB. According to CDC, using a chainsaw for merely 2 minutes without proper hearing protection could result in hearing loss. Regardless of which kind and where you’re going to use a chainsaw, you should never use it without having proper hearing protection and other safety gear.

Long-term exposure to high levels of chainsaw vibrations can cause damage to your hand. According to figures, there are over 200,000 workers in the USA who are exposed to chainsaws in the industry, while hundreds of thousands of people use chainsaws in normal households. This makes vibration a fairly common reason for chainsaw accidents.

The vibrations can lead to potential circulatory problems in the fingers and hands. You might have heard of vibration-white-finger, when the blood circulation in your hand is affected by the continuous exposure to vibration. Other damage could be caused to the muscles and nerves in the hand and the tendons of the wrist.

For preventing such injuries, use vibration dampening gloves to keep the hands warm, have a properly tensioned and sharp chainsaw, and hold the chainsaw tightly when cutting or pruning.

Another common accident that can be caused by a chainsaw is a cut. Cuts can be caused by a variety of issues if you aren’t attentive. Some of the reasons that result in cuts include improper tension, loose chain, not having the right balance, and more.

The cuts can be avoided by keeping these details in mind –

Chainsaw kickback – A major cause for chainsaw accidents

Chainsaw kickbacks usually occur in the kickback zone of the chainsaw blade. This zone refers to the top of the tip in the chainsaw bar. If you’re using this point of the chainsaw to cut, the blade gets pinched on the wood, and you’ll be on the receiving end of the dreaded kickback.

You should keep in mind that the larger your guide bar’s nose, the higher will be the probability to receive a chainsaw kickback. The kickback zone is considered to be a high-risk area, and you’re advised to not use the part of the bar when cutting or pruning, as it would increase the chances of receiving a chainsaw kickback.

What are the causes of chainsaw kickback?

Kickback usually occurs when the chain gets pinched or stuck on something, such as a piece of wood. As the chainsaw isn’t capable of handling a large piece of wood once it hits the cutting tooth, the chain will stop entirely, leaving no other outlet for the power to go. It can be easy to forget that even if the chainsaw chain gets stuck, the engine will continue to run and the power is still there. According to Newton’s third law of motion (for every action, there is an equal and opposite reaction), the kickback will be initiated.

The more the chainsaw has gotten stuck, the more brutal and dangerous will be the kickback. Under normal circumstances, the individual teeth of a chainsaw tend to take off little pieces of wood at the time. It takes place rapidly when operating the chainsaw, making for a clean cut. Usually, chainsaws are manufactured in a way so that the depth gauge allows for around 0.018 to 0.030 inches of wood to be cut with each cut. In the kickback zone, the alignment is such that more wood is cut than expected below the cutting tooth.

How to prevent chainsaw accidents?

Firstly, check for any potentially wet patches if the area receives heavy rain. Check for possible debris around the spot. Search for potential areas that could be at risk in case something goes wrong.

Lastly, you should keep an adequate medical kit with you, in case something goes wrong. The medical kit will help in offering first aid from any minor injuries that would otherwise flare up till you get professional help.

A thorough inspection of your chainsaw is something that has to be done regularly. Check for parts that are electrocuted or worn out. Timely replacement of worn-out parts will help you prevent potential accidents.

3. Wear a PPE kit and other safety gear

Once you have inspected the area and the chainsaw you’re about to use, now is the time to prepare yourself to carry out the task. However, you should remember to wear a professional PPE kit or if you don’t have it, wear the mandatory protective gear.

A PPE kit needs to include tough headgear, face mask, noise cancellation aid, chainsaw pants, and more. The sturdy shoes deserve a separate mention as they have to be used during every cutting or pruning task. None of the shoes will act as an alternative.

All the manufacturing companies include a manual full of rules, instructions, and safety tips when using a chainsaw. Unfortunately, many people cannot get past worrying about the warranty certificates to look at the instruction manual. Reading the manuals will be as important as choosing the right chainsaw. A trained professional would have inevitably gone through multiple manuals, while novices generally skip the rules and end up getting into trouble.

5. Make a habit of getting the stance right each time

There are many situations where people skip the routine and end up missing out on small things like stance. As for the surface, many people think that the stance isn’t important as long as you keep your balance. However, the stance is more critical than you think.

When you’re using the chainsaw, attain balance by placing one foot behind the other and have a firm grip on the chainsaw to combat the potential kickback motion. Finally, hold the chainsaw closer to your body to gain better control.

Kickback is very similar to the motion of recoil. In case of kickback, the equipment will push the chainsaw toward the individual. It occurs when the top end of the guide bar ends up being jammed to an object in the path at which the cut is being made.

The kickback motion could be more than a little dangerous, especially considering the speed at which the blades are moving. It is where having a firm grip will help to control the speed of the backward motion. Further, having the right stance will reduce the risk of injury to the upper portion of your body.

7. Clear out the area during and after the process of cutting

When you’re in the middle of cutting and pruning, you need to constantly clear out the area so that you don’t accumulate clutter and end up tripping over it. The unnecessary accumulation will add to the problems and lead to accidents. It is recommended that you should clear out the path that has cut logs. Further, letting the logs gather should be avoided, while the bystanders need to stay at a minimum distance of 150 feet away from the spot.

If you were looking for answers to how do most chainsaw accidents happen, then this article would have given you the answers that you needed. As long as you carefully follow the safety measures and remember the steps mentioned above to prevent chainsaw accidents, you will have a great chance of avoiding any potential accidents.

ALSO READ: Can You Use A Chainsaw On A Ladder?

ALSO READ: Why Does My Chainsaw Smoke: Reasons And Tips To Stop Chainsaw From Smoking