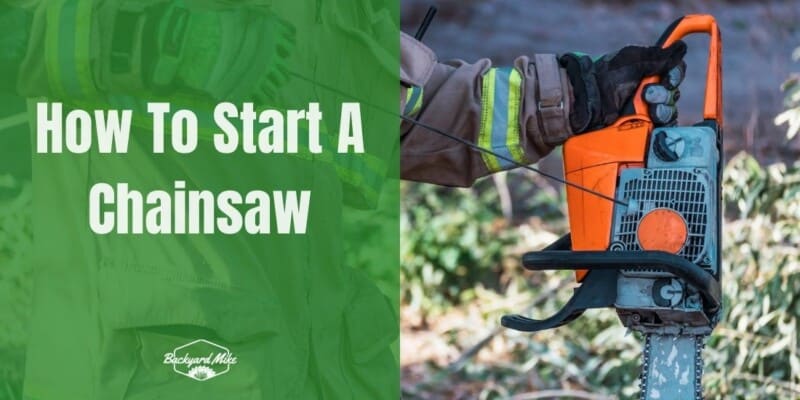 How to start a gas chainsaw

Many beginner chainsaw users have been there, not knowing how to properly start a chainsaw and having trouble getting it to work. During such moments, there is no worse feeling than having your chainsaw stutter and not start properly, leaving you in a spot of bother.

A gas-powered chainsaw is far easier to start than other kinds of chainsaws. Before starting the chainsaw, you must perform a maintenance check.

Without the chain brake applied, the gas chainsaw’s chain will rotate around the bar as soon as the engine starts. Setting the chain brake will be one of the most crucial steps that you can take for your safety.

Your engine will start better and more easily once you provide it with a concentrated burst of fuel. Closing the choke will block any airflow, which will change the mixture of air and fuel that flows to the engine, giving it a strong blend.

Older chainsaws come with a primer bulb. It’ll send fuel into your chainsaw’s carburetor, which will feed the engine the necessary fuel and air needed for keeping it running. Your gas chainsaw will require 4-5 pushes on the fuel bulb.

On newer chainsaws, you are likely to find an air purge bulb instead. Pressing the fuel bulb will push excess air out of the fuel lines.

5. Pull the cord to start the engine

Place your gas-powered chainsaw on the ground, place one of your hands on the handlebar, and your right foot on the boot grip for added stability. Slowly pull the cord until you feel the resistance. Then, firmly and rapidly, pull the cord until the engine fires up, and you hear the engine sound like a cough. This is the normal sound of an engine trying to start.

Move the choke lever to the “Run/On” position, as it’ll open the choke but keep on running the engine at high idle. It will add air to the mixture of fuel getting fed to the engine so that it is able to run consistently without being flooded.

This time, you will need to pull the starter cord multiple time until you hear the engine fire up. Keep pulling the cord until the chainsaw smoothly starts. Once it does, it’ll continue running.

Let the gas chainsaw run for a few minutes. This will allow the chainsaw to reach an ideal temperature to use. Then, slowly hit the throttle once and release it for setting the engine to low idle. Once you’re ready to put your chainsaw to use, simply release the chain brake, and you will be ready to go.

How to start an electric chainsaw

Most corded electric chainsaws tend to require pressing a safety lock button for making the switch trigger operational, while also preventing accidental starts. Check your chainsaw’s instruction manual to get information specific to your chainsaw.

How to start a battery chainsaw

Similar to gas-powered chainsaws, battery or cordless chainsaws will come with a list of safety maintenance tasks that you should undertake before starting the chainsaw. For battery-operated chainsaws, always prefer to use fully charged batteries while also keeping backup batteries nearby.

One of the advantages of using cordless chainsaws that beginners like is the minimal effort required to start them. There is no cord to pull or any throttle to open, just a few buttons to press.

Unlike gas chainsaws, which tend to rotate even when the chainsaw’s engine is idling, the chains on battery chainsaws will not spin unless you press the trigger. This means you won’t need to disengage the chain brake on a cordless chainsaw for it to start and spin.

Your chainsaw’s instruction manual may refer to the safety button by other names, like the trigger lock or the throttle lockout. Regardless of the name mentioned in the instruction manual, this small button is normally found on the side of the rear handle.

Due to its location, the best way of pressing the safety button would be with the thumb on the hand holding the chainsaw’s handle.

How to start a Stihl chainsaw

Possible reasons why your chainsaw is not starting

The spark plug may be defective and need replacement

The ignition coil is the component that sends voltage to the spark plug and results in the spark that ignites the fuel and turns on the chainsaw. If the engine isn’t turning on, the coil might have been damaged, which happens over time with repeated usage.

Once you have ensured that the spark plug isn’t the issue, buy an ignition coil tester for checking. If you don’t get any spark during the testing, it means that the ignition coil is likely the reason and must be replaced.

A recoil tester will allow you to pull up on the starter rope and engage the starting mechanism for turning on the chainsaw engine. In case the recoil starter is defective, then the engine won’t be able to start.

To test if the recoil starter assembly is defective, slowly remove it from the chainsaw and see what is happening. The pulley system might be stuck and have to be placed back into the correct position. If you’re trying this and the chainsaw isn’t starting like it is supposed to, the recoil starter will likely need to be replaced.

The fuel issue is definitely one of the most common reasons for a chainsaw to not start. If the operator repeatedly tries to start the chainsaw through the recoil starter system, then it might have flooded the engine with fuel accidentally. A common indication that the engine has been flooded is by checking the smell of gasoline in the air.

If you believe that fuel has flooded the chainsaw engine, simply pull the starter cord a few times while holding the throttle, replace the spark plug, and try to start the chainsaw once again.

As with many mechanical tools, the quantity and quality of the fuel used will greatly impact its functionality and operation. When operating a chainsaw, check that the chainsaw is fueled properly so that the engine can smoothly run. Fuel will start deteriorating if left sitting and unused. If your chainsaw hasn’t been used in a while, make sure to check that old fuel isn’t collecting inside the tool. If the fuel is left unused for a long time, it’ll need to be cleaned and refilled.

ALSO READ: What Is The Best Time Of Year To Trim Trees: Never Cut Your Trees At Wrong Time

ALSO READ: How Tight Should A Chainsaw Chain Be: Know All About The Significance Of Chainsaw Tension