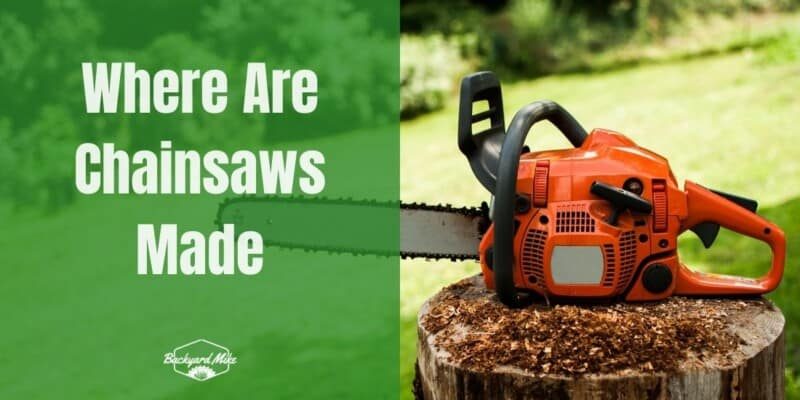 You’re probably familiar with chainsaws and how to use them, but have you ever thought about where are chainsaws made?

This guide will tell you all about where your favorite kinds of chainsaws are made, giving you a better insight into the tools you’re using.

Where are Husqvarna chainsaws made?

Husqvarna is undoubtedly one of the best when it comes to chainsaws. The brand is known for producing high-quality tools. The production of these chainsaws is distributed across many countries all over the world, but the production is primarily in the USA, Sweden, and China according to the tag that Husqvarna chainsaws carry. It is a reputed and reliable tool that you must have for your pruning and cutting needs. These chainsaws come with a starter cord with an attached sprint, making it easier to start while also being loaded with an air system that pre-cleans itself. Further, these chainsaws come with an easy switch to start and stop, whereas an indicator will show you the fuel level.

Where are Echo chainsaws made?

Echo is a big name in the chainsaw market. The brand has a wide lineup of fantastic products. There is no doubt regarding the quality of Echo chainsaws. The chains will come with the latest features to meet the requirements and needs of a modern user.

Where are Poulan chainsaws made?

As Poulan Chainsaw is a subsidiary of the Husqvarna group, the Poulan chainsaws are also manufactured in the same countries as the Husqvarna chainsaws – China, Sweden, USA, Germany, France, and Brazil.

The Poulan chainsaws are full of all the desirable features that you might want in your chainsaw. One of the most delightful qualities in these chainsaws is the air purge bulb. Even though it doesn’t have a tool-free chain tensioner, it’ll come with a built-in chain tensioner that is attached to the bar. This makes it extremely convenient to hold, as you’ll have a firmer grip on the handles.

Where are Stihl chainsaws made?

Stihl chainsaws are mainly manufactured in the USA and China. This brand of chainsaws is one of the most trusted and frequently used. These chainsaws are made in factories located in states like Virginia, USA, and Qingdao, China.

Over the years, Stihl has excelled in the market thanks to its high-quality products and excellent customer service. It is a brand renowned for extremely user-friendly chainsaws. The thing that makes Stihl stand out from the competitors is its chain, as you’ll get high-quality carbide-tipped chains in Stihl products.

One of the most essential features of a chainsaw is the start system. Some chainsaws will come with an extremely tough, meticulous mechanism, which can sometimes be very confusing and challenging for beginners to start. Luckily, that isn’t the case with Stihl chainsaws as they come with an easy start system, which makes them simpler for anyone to start without any issues. The Stihl chainsaws are effortless to fire up and all you’ll need is a gentle pull of the starter rope. You must keep the tension in the starter rope constant. The role will stimulate the spring for releasing the pressure to allow the engine to start.

When starting a Stihl chainsaw, you’ll experience instant ease when starting it, and you won’t face any extra jerks or require excessive strength to start the chainsaw. Another great feature of these powerful chainsaws is the air cleaner cover and oil caps. Click here and read our review of the best Stihl chainsaws.

Where are Craftsman chainsaws made?

Craftsman chainsaws are primarily manufactured in China, and they’re imported by MTD products. Craftsman also has manufacturing productions in many states all over the USA where the products are constructed and finished, although it doesn’t apply to their chainsaws.

Many chainsaw buyers wonder about the connection between Poulan and Craftsman as the two brands often have identical chainsaw models. This is the case because Poulan has a partnership with Husqvarna, which means that they often have parts in common.

Both Craftsman and Poulan are reputed brands that offer high-quality yet easily affordable chainsaws. This is the case because Husqvarna is responsible for the amazing quality of the components, but the best technology still remains exclusive.

Where are Jonsered chainsaws made?

Jonsered is another reputed brand of chainsaws, and it hails from the house of chainsaw giant Husqvarna. Jonsered shares the same manufacturing facilities that are used by the Husqvarna group. Jonsered chainsaws are primarily manufactured in plants in China, Sweden, Germany, France, Brazil, and the USA.

Belonging from the house of Husqvarna, Jonsered chainsaws belong to the quality of best chainsaws in the world. The models of Jonsered chainsaws are modern, and they’re designed to fulfill all your needs and requirements. What makes Jonsered chainsaws so attractive is their price and the fact that they’re cheap and budget-friendly. These chainsaws will include the upgraded facilities such as a tool-free chain tensioner, a starter cord assisted with a spring, an easy start-stop mechanism, pre-cleaning system for air filter, a fuel indicator, and more.

Where are Black Max chainsaws made?

The Black Max chainsaws will be incredibly smooth to use, and the difference will be noticeable, while the built-in anti-vibe system will ensure that your cutting or pruning task has become easier. The quality is top-notch, and it provides enough power to get complex jobs done with ease.

Where are Holzfforma chainsaws made?

Where are Dolmar chainsaws made?

Dolmar chainsaws are primarily manufactured in Hamburg, Germany while the other manufacturing plants include Japan, Brazil, China, Mexico, and Romania. Dolmar Outdoor Equipment got taken over by the Japanese tool giant Makita in 1991, with the Japanese company acquiring full control over its facility in Hamburg, Germany. Dolmar is one of the best in the chainsaw market, and it has a great range of chainsaws and other powerful tools.

Where are Coocheer chainsaws made?

The Coocheer chainsaw can be installed within minutes and all you need to do is open the side cover and install the inverted plate. Then, you can install the saw chain while keeping close attention to the direction of the knife. After you adjust the tightness of the chainsaw, you should close and lock the side cover. Another benefit of using a Coocheer chainsaw is that you’ll get a spring-assist pull cord. You’ll find the mode easy to use due to the spring-assist pull cord and knob. Together, they will serve as a simple start system and make it easier and more efficient to cut or prune.

Where are Remington chainsaws made?

Remington is one of the most popular companies in the chainsaw market and the chainsaws are manufactured in the USA, China, Mexico, and Europe. The headquarters of Remington are located in Valley City, Ohio, USA with manufacturing plants spread all over the world. While it isn’t clear which part of the chainsaws is manufactured in which country, it is known that different parts are created in different countries. The parts are brought together and assembled in the USA and shipped to chainsaw users in the USA and worldwide.

Where are Makita chainsaws made?

Makita chainsaws is an Asian brand with an office located in Anjō, Japan, and manufacturing facilities are located in China, Brazil, Mexico, Germany, Dubai, Romania, the UK, Rwanda, and the USA.

Makita is a giant when it comes to the chainsaw industry. As the name suggests, Makita isn’t an American or a European company, but it is a Japan-based mogul of the tools industry. The brand is popular for its conviction and flawless chainsaw products. The incredible growth of Makita chainsaws can be summed up by the fact that Makita has taken over another tool brand Dolmar in 1991. Further, Makita has also undertaken Dolmar’s factory that is located in Hamburg, Germany.

Where are Oregon chainsaws made?

Chainsaw users will have probably heard of the name Oregon chainsaws quite often as the brand is known for high-quality chainsaws and home tools in general. Oregon Tool, Inc. has garnered a reputation for having high-quality and durable chainsaws. Based in Portland, Oregon, the brand globally manufactures chainsaws in 10 different plants across 5 different countries. Oregon chainsaws used to be manufactured in Portland, Oregon for a long time, but the manufacturing got moved to the US Midwest and Canada sometime back.

Even the most staunch chainsaw lovers often wonder where chainsaws are made, especially the ones that they’re currently using. It is important to know all the details about the chainsaws that you’re looking to buy such as the engine power, speed of the blades, battery backup, and more. Knowing where the chainsaw is manufactured is important as well. Hopefully, the information mentioned in this article will come in handy the next time you’re in need of a new chainsaw. You’ll now be able to make more informed decisions with the facts and knowledge of where are chainsaws made and where they are imported from.

ALSO READ: What Should You Not Do With A Chainsaw: The Do’s And Don’ts

ALSO READ: Can You Use A Chainsaw On A Ladder?