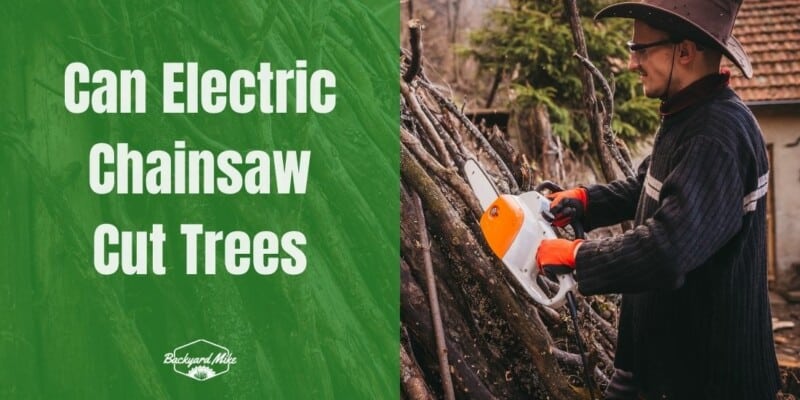 You’ve bought a new electric chainsaw, and now you’re wondering if you can use it for cutting trees. The short answer for you is yes, but it depends on the size of the tree and a few other factors. Continue reading, and you will get to know all about it!

How good are electric chainsaws for cutting large trees?

Electric chainsaws are among the first options that people go for when they have to cut down trees. These are comparatively cheaper than gas-powered chainsaws. While both of them are great for different purposes, but more people go for electric chainsaws as they’re powerful, safer to use, and make less sound. There are many studies that compare how the two types of chainsaws work in terms of safety and efficiency.

When is it best to use an electric chainsaw?

Limitations of electric chainsaws and when to use a gas chainsaw

You can run them using a portable generator, even though if you do not own one, it wouldn’t be worth it to buy an expensive accessory to run a chainsaw.

Can you cut wet trees with an electric chainsaw?

For people who live in areas that receive a lot of rainfall throughout the year, it is a common question to have that can you cut wet trees with an electric chainsaw? And the answer to that is a resounding yes.

Will wet wood damage your chainsaw?

Wood comes in a lot of types, from wet to dry, to new and old. Each type of wood comes with its own level of resistance. The same applies for different species of trees. For instance, cutting through the balsa wood tree will demand considerably less effort than say cutting through an ironwood. Similarly, cutting through dead wood will be far easier than cutting through green wood.

What about cutting through wed wood and does it pose any threat to your chainsaw?

The simple answer is no. The moisture present in the wood will make any significant difference to the cutting process. It won’t place any additional resistance on the chainsaw, and you won’t need to put any extra effort into cutting through wet wood.

However, as you’re cutting wet wood, the sawdust will stick to the chain instead of getting blasted away. This might mean you have to clean the chainsaw and remove the sawdust more frequently so that the performance of your chainsaw continues to be as strong as possible.

It isn’t bad to cut wet wood with your electric chainsaw as snow, raindrops, or dewdrops on the wood won’t cause any harm to the chainsaw. Interestingly, it’ll be easier to cut through wet wood as compared to dry wood because the moisture in the wood will act as an automatic, natural lubricant. People who are short on time will definitely love cutting wood when it is wet. Dry wood tends to lack moisture, so it creates more friction on the chain of the saw when cutting through the fibers of the wood. The strong friction slows down the speed of the chain.

It is a common misconception that cutting through wet wood can dull the chain on the chainsaw. However, the reality is that it won’t dull the chainsaw any faster than dry wood does. As wet wood naturally lubricates the chain, it prevents overheating and allows the chain to glide effortlessly with minimum friction. This further prevents the chain from becoming dull. It is essential to check the size and density of the wood that you’re planning to cut through.

There are many newbies who wonder can electric chainsaw cut trees, even thinking if it is possible in the rainy weather when the wood is wet. Hopefully, this guide has offered you all the answers that you were looking for. While electric chainsaws are great for cutting wood, and they have their advantages over gas-powered chainsaws, the electric chainsaws come with certain limitations as well.

Note: When you’re cutting wood when it is raining, it is common to loose grip and slip. It is important to prioritize your safety and wear gloves, helmet, and other protective gear including a protective vest and eyewear to ensure that even wet conditions don’t cause any accidents.

ALSO READ: What Should You Not Do With A Chainsaw: The Do’s And Don’ts