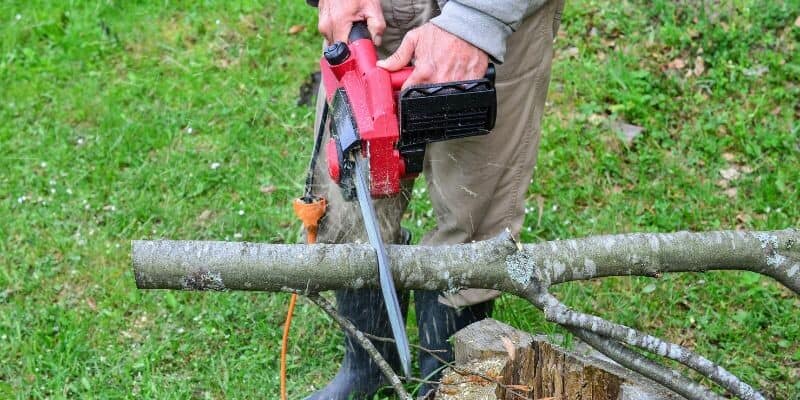 Are you a beginner electric chainsaw user, and you’re wondering whether your new machine needs oil? If so, then you will get all your answers here.

If talking about fuel or gasoline, then electric chainsaws don’t actually need it. However, it is an entirely different story when it comes to the lubrication of the chain and bar, there will be oil needed. With this oil, they will remain functional and well maintained for a long time, helping you carry out multiple firewood cutting or carving jobs.

Unlike gas-powered chainsaws that need a specific oil-to-gas ratio to run and cut, an electric chainsaw doesn’t actually need it. It makes use of an environment-friendly method like plugging it into a power source.

However, it isn’t said that it doesn’t require any oil. An electric chainsaw is a machine, and every machine requires oil for one reason or the other. Even Tesla with its “no harm to nature” promises requires oil. Like Tesla, even electric chainsaws use oil for lubrication, which helps them perform optimally without resistance. Oiling the chainsaw chain and bar will make it easy to cut wood, while also increasing the lifespan of the chainsaw.

Lubrication is important for all machines, especially cutting tools. It helps prevent any damage and occasional smoke. If the machine isn’t tended properly, it’ll inevitably get rough and produce smoke while you’re performing heavy tasks.

A special type of oil is used for the lubrication of the bar and chain while reducing friction and providing smooth cutting performance. This is not the same oil used in gas-powered chainsaws or any random vegetable or motor oil. They can easily cause damage to the oiling system. It is an entirely different thing. Chainsaw lubrication oil is a type of oil made specifically for tending the chain and bar. Its key characteristics include –

It is well-known that gas-powered chainsaws require oil to operate. However, does it apply to electric chainsaws as well?

There is no getting around the fact that you will require oil for your chainsaw, whether it is an electric or gas-powered chainsaw.

How to refill the oil in your electric chainsaw

All chainsaws make use of lubrication for smooth and effortless running and proper maintenance. An automatic oiler will supply oil to the chain from the bar as it is rotating around it. When the oiler or lubricator runs out of oil, you can refill it by following these steps.

You will soon get the hang of the refill process and won’t think twice before checking it such that it doesn’t run dry. Think of it like you’re refilling your car. You would not want to run near empty for long.

Even though electric chainsaws don’t use gasoline and oil as gas-powered chainsaws do, you’ll need to lubricate the bar and chain as you’d any chainsaw. This will help ensure that it runs properly and enjoys a long life for you to use in the work and home tasks.

The way today’s market is structured, most chainsaw manufacturers produce their own brand of the bar and chain oil for their own chainsaws. By no means is it essential to use a specific brand name. However, the manufacturer might offer the best lubrication for your model.

Some companies who don’t produce their own lubricant will still name a particular lubricant that they’ve partnered up with and recommend using it for the chainsaw you’ve purchased.

You can buy oil at many home and garden stores, big box stores, hardware stores, and even engine shops. Many people choose to purchase it at a place where you can purchase larger quantities at a less expensive price per fluid ounce. You’ll be able to gauge whether that is a great option for you or not based on how often you’re using the chainsaw.

Chainsaw companies conduct performance tests to see which lubrication oil works best in their systems. While some oils might be less expensive, they could be costlier to use eventually. Moreover, most companies show that fresh motor oil should be used for lubricating your electric chainsaw. Most companies advise users to use an SAE 30 motor oil in the summer. During winter, it is advised that you should use an SAE 10 motor oil in the winter for producing the best lubrication.

Using the wrong type of oil can damage the bar and chain, and it’ll happen quicker than you realize. Damage can also occur to the clutch assembly and drive sprocket. A smoking or extremely hot tip can mean that lubrication is too low. Moreover, it is recommended that you should immediately shut off the engine in such cases. You’ll need to check the oiling system to ensure that the chainsaw isn’t damaged.

No matter what type of chainsaw you’re using, chainsaws are mechanically powered saws that use sharp teeth attached to a rotating chain. Electric chainsaws are used effectively to cut, prune, and buck. They’ll make work much easier for the user. However, safety guidelines must be followed at all times. You must pay close attention to what the instructions say –

Why do chainsaws need oil?

Should you use regular oil in an electric chainsaw?

Unfortunately, you cannot use regular oil in an electric chainsaw. Electric chainsaws need lubrication for the bar and the chain. This type of oil is made specifically for this purpose. The user manual will contain the answer to what type of oil you should use in your chainsaw. However, many companies recommend that you should use motor oil with SAE having a rating of 5-10. Moreover, you must consult your local professional for more insight.

Can an electric chainsaw work without oil?

An electric chainsaw will work even without adding any oil to it, as it doesn’t need oil for running. However, don’t think there will be no problems. The oil is actually used for the bar and chain. It is more for the maintenance purpose of the electric chainsaw.

How to know if your chainsaw needs oil?

There are a few common indications of low lubrication such as a smoking tip, extremely hot chainsaw, and kickback and resistance while cutting. In such scenarios, you need to turn off the chainsaw and refill your tank.

ALSO READ: How To Store Chainsaw Without Oil Leaking