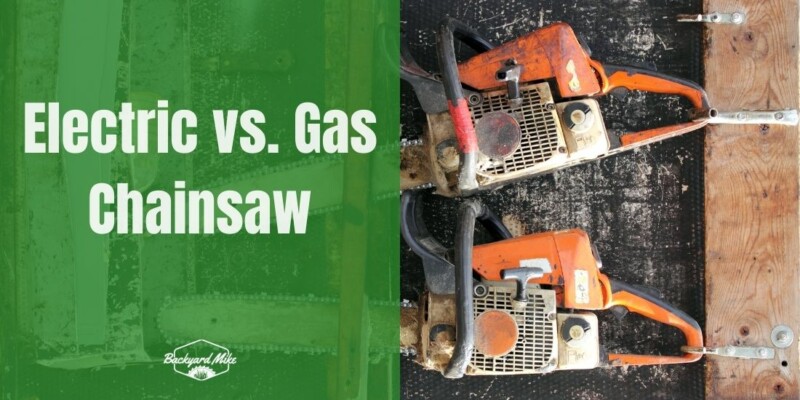 Are you looking to buy a new chainsaw? Do you feel confused about the Electric vs Gas chainsaw debate? Don’t worry, every chainsaw buyer has been in those shoes of yours at some point.

Everyone wonders which type of chainsaw is ideal for them and which option will be more cost-efficient. However, the type of chainsaw that you should prefer is the one that suits your needs the best. There are pros and cons of using an electric chainsaw, and there are pros and cons of using gas chainsaws. In this article, you’ll get to know all about the positives, negatives, uses, and more about these chainsaws.

Which type of chainsaw is better?

Both types of chainsaws come with their advantages and disadvantages, making them more suitable than the other in certain situations.

If you’re looking to know which type of chainsaw is best for you, there is no set answer, as the question is very subjective. It depends on your needs and requirements. While gas chainsaws may be the better option in terms of raw power, the electric chainsaw will win the battle if you’re looking for a silent, cost-effective machine. If you wish to know which among gas vs electric chainsaw is better for you, then you’ll need to decide it for yourself.

There are a few operational differences between a gas chainsaw and an electric chainsaw. However, the heartbeat of the two types is the electric motor. Electric chainsaws can easily work through long periods. However, you can only work closer to the power outlet. The cords normally come around 100 feet or less, which often hamstrings the user into tight situations. Electric chainsaws that run on batteries need to be recharged frequently and don’t run for more than an hour maximum. This often leads to projects getting cut short.

The kind of task you’re undertaking

Another difference between an electric vs gas chainsaw is the kind of project you can handle. Even though both types of chainsaws have made massive strides in recent years, the former is still less powerful as compared to the latter. You cannot expect an electric chainsaw to be able to cut with the same power as a gas chainsaw.

Electric chainsaws will be perfect for typical yard projects, such as cutting trees, limbs, branches, and trimming bushes. They are also light and compact, which makes them comparatively easier to lift and reach high branches. All these factors make electric chainsaws a lesser hassle to use and store.

For larger projects where you need a powerful machine, a gas-powered chainsaw will be far superior. These powerful chainsaws will be able to cut through even the toughest of woods. Gas chainsaws will come in a wide range of options and bar lengths to get bigger cuts. Even though they are less compact, gas chainsaws will be more powerful and more effective for professional use.

Another big difference between electric chainsaw vs gas chainsaw is the sound levels at which they operate. Gas-powered chainsaws will be louder and have negative effects, ranging from annoying your neighbors to potentially giving you hearing loss if you don’t use proper safety equipment for your ears.

Ultimately, the electric chainsaw would be the better option if you’re looking for a quieter and ear-friendly option.

Advantages of using a gas chainsaw

In the discussion of electric chainsaw vs gas chainsaw, there are many advantages of using the latter. Gas-powered chainsaws, similar to any gas-powered tool, will be the more powerful option. The other kind of tools will struggle to match the raw power that the internal combustion engine generates.

As the chainsaw runs on gas, it’ll give you much more flexibility to work whenever and wherever you want. Moreover, if you’re carrying multiple cans of gases, you can use them for as long as you want. All you need to do is top up the fuel whenever you’re running out of it.

A gas-powered chainsaw also tends to be the more economical option to go for. This isn’t to say that all the models are very cheap, some of the high-end ones definitely cost a lot. In the short term, you will be able to get the most out of your investment.

Disadvantages of using a gas chainsaw

There are many obvious disadvantages that come with using a gas-powered chainsaw. These machines run on gas, and they’re far louder than any kind of electric or battery-powered chainsaw. Moreover, they also release harmful emissions, which means they aren’t the best option for the environment either.

Gas engines tend to require a lot more maintenance for keeping them in great working condition. Some of the components will need replacing frequently, making them a costlier option to use in the long run. It is even more complex to use if you don’t know the working mechanism of the chainsaw.

If you add the total cost of maintenance to the initial money of the chainsaw and the amount you’ll be spending on gas, the cost will be incredibly high. The cost quickly adds to form a massive amount. In the long run, a gas chainsaw will be significantly costlier than using an electric chainsaw.

Lastly, as gas-powered chainsaws tend to be the more powerful ones, they can often be trickier for beginners to use. Novices often find them complex to manage and end up putting themselves into dangerous situations.

Advantages of using an electric chainsaw

Electric chainsaws tend to run far more quietly as compared to gas-powered chainsaws. As they don’t consume any fuel, they won’t release any harmful emissions, making them far less polluting.

These chainsaws also tend to be lighter, smaller, and comparatively less powerful. It makes these chainsaws easier to make, even for beginners and rookies.

Disadvantages of using an electric chainsaw

The primary disadvantages of using an electric chainsaw come from the cord itself. As these chainsaws run on the mains’ power, you will only be able to work within the range of the cord or outlet. You can slightly extend that range by making use of an extension cord, but the area you can cover will still be limited.

On top of that, the cord may also get in your way constantly as you’re working. You should be careful as the cord does not dangle in front of you when you’re cutting. It will also present a tripping hazard as you could trip over the cord when you’re operating the chainsaw. This will lead to minor to even serious accidents.

Lastly, another disadvantage is that they won’t offer the same amount of power as gas-powered chainsaws. This makes electric chainsaws unsuitable for the bigger cutting jobs.

Gas chainsaws come with a range of different bar lengths, allowing you to easily customize the machine a bit. These are comparatively stronger and last longer as compared to other types of chainsaws. However, gas chainsaws are pretty heavy and will leave you fatigued after using them for a few minutes. Further, it is very tricky, especially for beginners, to mix oil and gas in the appropriate quantities. This mixture will also leave you smelling like a mechanic’s garage after each use.

Thank you for reading the guide. Hopefully, now you know all about the pros and cons and differences between an electric chainsaw and a gas chainsaw. It will clear out any confusion and help you figure out what kind of chainsaw is perfect for the task that you’re looking to accomplish.

A gas-powered chainsaw will be the better option for someone who is looking for raw power and the ability to work for longer periods with little restrictions. However, you will need to keep in mind that gas chainsaws are pretty heavy and create a lot of noise. These are the ideal choice for professional users as well as for someone who is looking to be involved with heavy-duty cutting.

Meanwhile, electric chainsaws will be the better option for home users who have light work. These work well if you are looking to work within the length of an extension cord from the power source. If you’re looking for a chainsaw for casual cutting and trimming needs, then an electric chainsaw is a perfect choice.

ALSO READ: How To Mix Chainsaw Gas And Oil In Your 2-Stroke Chainsaw Engine

ALSO READ: Chainsaw Chain Types: Which Type Of Chain Is Best For You?