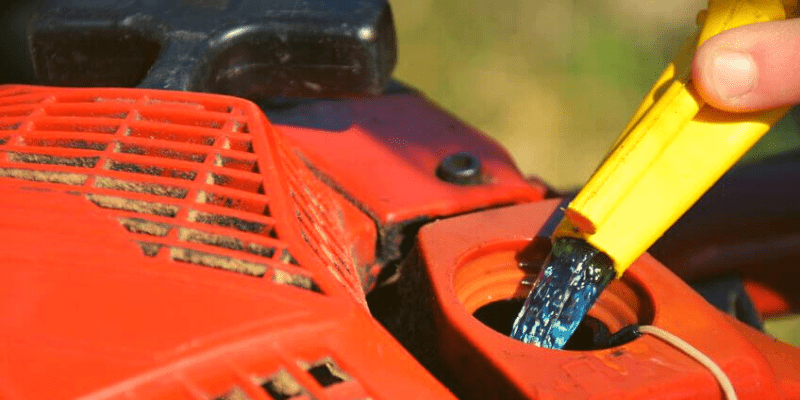 Have you ever had your chainsaw engine betray you and result in stop-start performance? If yes, then did you ever wonder if it could be due to mixing improper chainsaw gas?

How to mix chainsaw gas and how much quality to mix are essential when using a chainsaw. Sometimes, people mix the chainsaw gas in the wrong ratio. You should always remember to have a fuel-to-oil ratio of 50:1 to get smooth performances. In this article, you’ll get to know all about how to mix chainsaw gas, which gas to mix, and other tips to keep in mind.

What is the difference between 2-stroke and 4-stroke chainsaw engines?

Mixing gas and oil mixture for the chainsaws

There is no standard oil-to-gas ratio that works for every single in a chainsaw. You’ll need to check the user manual that comes with the chainsaw to know the ratio for your particular chainsaw. However, the majority of 2-stroke chainsaw engines and many other similar tools run on a fuel mixture that is one part oil to 50 parts gas, giving it the ratio of 1:50. Stihl, one of the biggest chainsaw manufacturers also recommends the use of a 1:50 oil-to-gas ratio.

However, many chainsaw engines also run on a mixture of ratio 1:40 while other ratios are also possible. This is why you should check the ratio in the manual, as using the wrong mixture could damage your chainsaw.

Just to paint a better picture, a 1:50 ratio of oil-to-gas will work out to 2½ oz of oil to every gallon of gas. When you make the oil-and-gas mixture, you should make sure that you measure the amounts as precisely as you can. If you do not get it right, you can easily mix in the wrong measurements and damage the engine of your chainsaw.

Having said that, if you end up making a mistake, it would be better to have a bit too much oil rather than having not enough oil. If you’re in doubt, you should prefer to be generous when adding oil to the gas.

But what happens if you end up forgetting to add oil to the fuel that you’re putting in the chainsaw? You’ll be able to spot it pretty quickly. The engine will instantly start smoking within less than a minute and if you do not shut it off immediately, it’ll likely suffer irreparable damage.

How to mix gas and oil for a chainsaw?

When using a chainsaw with a 2-stroke engine, you can easily mix the gas-and-oil blend to use as fuel. There is no special technique or skill required. All that you’ll require is a gas can and something that will allow you to measure the volumes.

Start off by using a clean gas can

Not many people realize this, but the biggest cause of contaminated fuel is dirty fuel containers. It is important that you should store fresh gas in a clean, authentic container that is designed for carrying fuel.

Carefully measure and pour the oil and gas

It is important that you should measure the exact quantities of oil and gas in the mixture. Normally, most 2-stroke engines use a mixture having one part oil to 50 parts gas, giving it a 1:50 ratio. However, a few chainsaws also use a 1:40 oil-to-gas mixture.

Close the cap and finish up

Once you’ve added the oil and gas, you should close the cap on the gas. Give the thing a good shake and ensure that the two components are properly mixed.

Many chainsaw brands today sell high-quality two-stroke oil. This is the case as two-stroke engines tend to require two-stroke oil that is designed and formulated for high performance. It is recommended that you should go for a quality lubricant or two-stroke oil that you’ll mix with the gas. In case you’re not using a pre-mixed gas and oil blend, you should look to use unleaded ethanol-free gas.

There you have it, hopefully, now you know how to mix chainsaw gas and oil and run your chainsaw smoothly. It is important to always get the ratio right when you’re mixing gas with the two-stroke fuel oil. If you add too much oil, the engine will struggle to start and generate carbon buildup. On the contrary, if you add little oil, your engine might overheat and sustain internal damage. The correct mixing ratio for most chainsaws is 1:50 with one part oil to 50 parts gas. Additionally, some chainsaw engines also use a mixing ratio of 1:40.

ALSO READ: Parts Of A Chainsaw: Chainsaw Components That You Should Know About

ALSO READ: Electric vs. Gas Chainsaw: Which Is The Better Chainsaw Option For You?