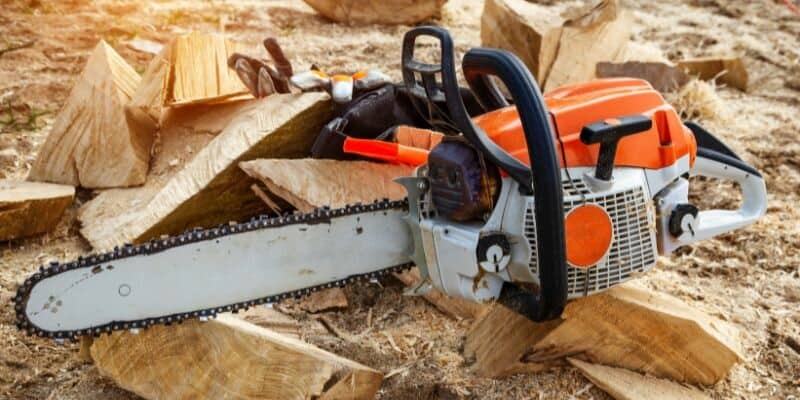 Are you a beginner chainsaw user looking to purchase your first chainsaw, but first you want to learn about the tool? If yes, then you are certainly in the right place.

Parts of chainsaw is something every chainsaw user must learn about before they’re in a position to use the machine. There are numerous simple but essential components that play integral roles in the working of the chainsaw. There are many different components that are used in chainsaws such as the bar and chain, brakes, handlebar, pull cord, oil tank, air filters, spark plugs, throttle, muffler, anti-vibration system, and more. Further, high-end chainsaws also have parts that aren’t present in every chainsaw.

In this article, you will get to learn all about the complete breakdown of the chainsaw, the parts of chainsaw, key components for chainsaw safety, and more. Continue reading to get all the answers that you are looking for.

The complete breakdown of each part of a chainsaw

Whether you’re upgrading to a new chainsaw or you are looking to purchase your first one, it’ll be a great idea to clearly understand the different parts of a chainsaw. Sure, the chainsaw chain, handles, and engine require little description, but it’ll be helpful to learn the location of other parts as well. Don’t worry, you will learn about it here.

Luckily, explaining and understanding chainsaws are simpler than most other machines. The machine comes with a compact set of parts and features that can be grabbed easily.

For easier understanding, you can divide a chainsaw into different mechanical modules. The first one can be the chain bar containing a saw blade converted into a chain. The chain bar will be put around a long metal part that varies in length depending on the chainsaw models.

The second module could be the power source. It could be the gas engine or the battery for electric-powered chainsaws for running the motor. The power numbers will determine the cutting speed and how thick wood you can cut.

You can also have a third module for all the other parts in between. There are parts like a throttle, muffler, spark plugs, and more.

So without further ado, let’s begin with the parts of chainsaw that you should know about.

Even though both of them are separate parts of a chainsaw, they are widely considered single as they’re closely bonded together. The chainsaw bar converted into the chain runs over the metal bar, which also includes sprockets. The sprockets should be maintained properly for the smooth functioning of the saw.

Chain brakes are included in the chainsaw for preventing chain kickback if there is a mechanical failure. It is essential to maintain user safety and for preventing serious injuries.

Any malfunctioning could result in a kickback, which means chain brakes will make sure that the chain stops rotating over the metal bar immediately.

This is arguably the most important part of the chainsaw related to user intuitiveness. Ergonomic design, rubber grip, heated, and anti-vibration are some of the commonly designed features in the chainsaw handlebar.

The pull cord is a small rope with a plastic handle to get your chainsaw ignited. It is commonly found with gas-powered chainsaws. A convenient-to-pull cord will be a must-have, and otherwise, it could cause delays to get started in the middle.

For the mechanical maintenance to be done properly, an oiling tank will be provided. Once a certain level of oil can be maintained, the other mechanical parts like the chain bar and the oil will get their share of their own. It results in minimum user input for chainsaw maintenance.

You need to keep in mind that you won’t be able to use any oil option for your chainsaws. You must look out for the best bar and chain oil options available and then buy the one that best suits your needs and budget constraint.

To keep the emission levels in check, oil filters are usually installed inside the chainsaw engines. It will also offer users a much better environment for operating and getting the job done without causing health-related problems.

The air filter will protect the chainsaw engine from getting clogged with dirt and sawdust. Gas-powered chainsaws need a mixture of air and fuel for powering the tool. This component will filter the air such that only clean air flows through the engine.

You will be able to deal with the motor performance on your own while also setting the speed at which you want the chain to rotate along with the metal bar sprockets.

The flywheel will control the speed of the engine while also helping in cooling down the motor so that it doesn’t overheat.

The decompression valve will release the compression from the combustion chamber when you’re starting a gas-powered chainsaw.

A decompression valve will make it much easier to start the chainsaw when you’re pulling the starter rope.

The choke valve helps in starting the chainsaw. It essentially controls the amount of air and fuel reaching the carburetor.

The Occupational Safety and Health Administration or OSHA requires chainsaws to have certain components to meet a set of safety standards. Any chainsaw that is placed into service after February 9th, 1995, has to meet the requirements of ANSI B175.1-1991 (gas-powered chainsaws safety standards). These standards help in ensuring that the chainsaws are safe for the user to use.

The throttle is the component that controls the speed of the chainsaw chain. In a gas-powered chainsaw, the throttle will regulate the amount of fuel that is reaching the combustion cylinders. More fuel will mean more speed.

In electric or battery-powered chainsaws, the throttle will control the amount of amperage in the motor. More amperage will mean more power.

The chain brake will stop the chain from spinning when a sudden kickback occurs. Kickback can occur when the chain tip accidentally gets nicked or if the chain gets pinched.

Kickback is the fast, upward thrust of the blade back toward you, and the chain brake plays a key role in preventing serious cutting injuries. A chain brake can either be manual (a handguard that gets pressed during kickback) or inertia-activated (an automatic response depending on the force).

The muffler is an important part of gas-powered chainsaws that reduces the noise level. Without a muffler, the chainsaw could be too loud to operate or stand near without damaging your hearing.

The handguard is a shield for protecting the operator’s hands from potential flying debris while cutting. It will also help in protection against the top of the spinning chain.

What are the different parts of a chainsaw called?

A chainsaw essentially comes with three basic elements – an engine (or the power head), a guide bar, and the chain adjusted on the guide bar. Once you start your chainsaw, the power head will produce a centrifugal force that forces the chainsaw chain to glide on the bar. This is how the machine will work and help in cutting thick wooden logs and firewood.

What is the sharp part of the chainsaw called?

The sharp part of the chainsaw is known as blades or bucking spikes, and they help in penetrating the wood during the cutting process. Also referred to as bumper spikes or dogs, you can slice through large trees with ease when the blades of the saw are sharpened enough. You can use a chainsaw sharpener for this purpose.

What is the part that you pull on the chainsaw called?

The component that you pull on your chainsaw is commonly known as a rope start, a rewind start, or a pull cord. It is commonly seen in gas-powered chainsaws. When you’re pulling the cord in a gas tool, the 2-stroke engine will be started with two to three firm strokes. Once the chainsaw is started, you’ll be able to use it for cutting firewood or logs without any issues.

What is the clutch in the chainsaw called?

A centrifugal clutch or chainsaw clutch inside the engine will control its speed. If you focus on the speed and sound of the saw enough, it’ll produce more noise and vibration while you’re cutting or slicing a wooden log. Once the tool disengages from the wood, it’ll return to a lower speed level to help you save fuel or battery.

What do the H and L mean on the chainsaws?

Have you ever wondered what the letters “L”, “H”, and “T” actually mean on your chainsaw?

These letters are all synonymous with the different speeds of the chainsaw. The “L” screw will represent mixing the air and fuel during low RPM or when your chainsaw isn’t being used on a large trunk. Meanwhile, “H” stands for “High” and during this time, the tool will be actively involved in a heavy-duty cutting task. “T” stands for idle or when your chainsaw is on, but it isn’t being used.

ALSO READ: Chainsaw Dies When I Give It Gas: Why Is It Happening?

ALSO READ: What Size Chainsaw For Milling Is The Best