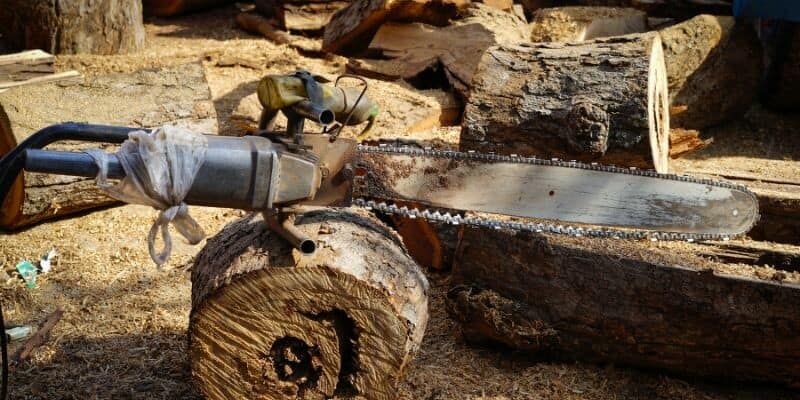 Are you a chainsaw owner curious to know about the history of the machine, and which was the first chainsaw created in history? If yes, then you are in the right place, as you’ll get to know exactly that here.

Which was first chainsaw is a common question that most curious chainsaw users have. Interestingly, the origin story of the first chainsaw goes all the way back to 1830. At the time, the equipment was actually called “Osteotome”, a word in the Greek language. The first chainsaw was developed by Bernhard Heine, and it featured small cutting teeth and sharp edges at certain angles to have maximum impact. It was not until 1926 that the first electric chainsaw was developed by Andreas Stihl, a German Mechanical Engineer.

In this guide, you will get to know all about the history of chainsaws, chainsaw history which was first chainsaw, the evolution of chainsaws, the future of chainsaws, and more. Stick around to get all the answers that you are looking for.

The early beginnings of chainsaws

Chainsaws have had a massive impact on the timber and forestry industries. Even though today most people take it for granted, your ancestors probably collected wood using axes and other heavy objects, which was a strenuous and time-consuming procedure. This was their reality, from antiquity until the conception of the first modern chainsaw. Felling wood was quite dangerous and time-consuming, a challenge that needed coordination and persistence.

Forests were at the center of human civilization. The communities that produced more wood managed to build shelters, hence surviving under harsh weather conditions while overcoming other difficulties. Wood was used for creating a multitude of simple tools and complex structures. Those people who controlled timber production managed to master the elements. With wood came fire, and it was then used for heating up metal, creating more advanced weapons, armor, and war machines.

The credit for the first chainsaw goes to German orthopedist Bernhard Heine, who rolled out the first chainsaw in 1830. The equipment was referred to as “Osteotome” back then, a word that was a part of the Greek language. It essentially meant a bone cutter and was designed to be used for medical reasons.

The chain designed by Bernhard Heine featured small cutting teeth and sharp edges that were placed at certain angles to have maximum impact. A sprocket wheel was used for turning the chain over the guiding bar, and cutting teeth would rip through the wood. It was manually operated back then and had minimal power.

Chainsaw history which was first chainsaw

Chainsaws were already being used during the first quarter of the 19th century. In England, circular and band saws were used as a means of refining and cutting large pieces of wood in the desired thickness and length. Meanwhile, axes were still being used, as saws were unable to cut through thick trunks.

The first chainsaw and the many that followed were used for medical purposes. They resembled modern chainsaws in design, but were comparatively smaller and needed manual turning of the handle to move the blade that carried the cutting teeth.

At the beginning of the 20th century, several researchers were looking for ways to power stronger and much more efficient chainsaws. The first patent for an electric chainsaw, the “endless chainsaw” as it was known back then, was granted to Samuel J. Bens.

In 1926, the first electric chainsaw that would go into production was patented by Andreas Stihl. It was a heavy and bulky model that weight around 116 pounds. Troops brought this model to Europe in 1941. Before the end of the Second World War, all the chainsaws were wheeled and carried around to be used by two people. As aluminum alloys and other forged steel parts started to be developed, chainsaws started getting lighter and lighter.

The evolution of chainsaws

Once the chainsaw was brought over to Europe, things changed pretty quickly. In 1959, Husqvarna came out with its first chainsaw, the Husqvarna 90. This was a beautiful piece of machinery that was equipped with cutting-edge mufflers that reduced the noise levels by 100%.

The innovation did not actually stop there. In 1964, Stihl came out with the first anti-vibration handle that made use of buffer elements for absorbing vibration from the blade and engine. However, Husqvarna managed to perfect the anti-vibration mechanism with the Husqvarna 180. The model ended up being a massive success, kickstarting exports to the United States.

In 1980, Husqvarna released the Husqvarna 40, a chainsaw that was made from lightweight composite materials. Its compact design and reduced weight meant that this chainsaw could be used for longer periods of time. Husqvarna then revolutionized the chainsaw industry once more by introducing the world to the remarkable AutoTune function. The new innovation was introduced in 2009, and it regulated fuel flow automatically, minimizing exhaust emissions and optimizing performance.

In 2012, Husqvarna released a range of battery products that offered exceptional petrol performance. This meant zero direct emissions as well as reduced levels of noise. As a result, maintenance was simplified and vibration levels reached record low levels.

Dolmar Chainsaw Company started the manufacturing of gas-powered chainsaws in 1927. The brand launched its first gas chainsaw in 1929 as gas power input presented far more power than the electric one. It offered a lot more cost-effective solution at a time when chainsaws used to be bulky.

These chainsaws were widely used in the 1930s and were deployed in WW2 for quickly meeting the wood and timber requirements. With the industrial revolution, aluminum and steel components became considerably lighter, which had an impact on chainsaw design as well.

The period of the 1950s and the time after that saw the chainsaws’ impact and effectiveness become unstoppable. The weight of the chainsaw fell around 30 pounds, and operation was possible with a single user. Technology came in and added to the user convenience and lightweight features.

Since then, many chainsaw brands have come into existence like Stihl, Husqvarna, Oregon, and more. They offer different kinds of features like chain brakes, an anti-vibration system, rear and front handles, and more. User convenience has become the top priority and the cutting power has also been enhanced with the installation of impactful motors. Safety features such as chain brakes and low kickback chain bars have made the users feel safer while playing around in the middle. The revolutionary pull cord system leads to chainsaws getting started with ultimate ease, with battery-powered chainsaws becoming the newest trend.

The manufacturing of the latest chainsaws and further evolution is focused on user goals, as power goals have been achieved to an extent. Thankfully, now users don’t have to put in a lot of physical effort and exhaustion level is also low even at the end of a long woodcutting day.

A bright future for woodcutting

Chainsaw users have come a long way from medical osteotomes and heavy axes. Chainsaws have been getting sturdier and much more powerful by the year. By using the best chainsaws that the market has to offer, you are essentially contributing to the constant evolution of the chainsaw industry.

Leading the industry today, Husqvarna has taken the modern chainsaw to the next level. Starting with the 2016 X-Cut Saw Chain, Husqvarna is offering a new cutting experience, which has resulted in higher efficiency. When you are looking for a new chainsaw, you’ll want a saw that gets the job done quickly and efficiently. You are also looking for a much more comfortable cutting experience that is good for you and the environment. Husqvarna chainsaws are equipped with the X-Torq Histo feature, which makes for fuel-efficient chainsaws that reduce exhaust emission levels while delivering a lot of power.

The chainsaw market has something for everyone

When it comes to chainsaws, variety is key. A wide range of chainsaw options means that you’ll be able to pick the option that works best for you. There are many exciting chainsaws to choose from in the market, with Husqvarna being one of the brands that are ahead of the curve. Here are the chainsaws for different types of users.

The 120e Mark II is an affordable, easy-to-use chainsaw. At merely 4.85 kg, this chainsaw offers exceptional maneuverability and cutting freedom. The X-Torq-powered engine will reduce emissions, while air injection will keep the filter clean. The 120e Mark II offers low kickback for maximum safety, while also coming equipped with the SmartStart technology, which allows for effortless starts each time.

The Husqvarna 460 is a powerful, robust petrol-powered chainsaw. With a longer guide bar, this chainsaw is ideal for demanding cutting jobs that need more power. The body is designed ergonomically, which allows for easy handling of the chainsaw’s power. The chainsaw utilizes a strong X-Torq engine and amazing features like LowVib and SmartStart.

For the best experience – Husqvarna 572 XP

The Husqvarna 572 XP is an impressive, next-generation chainsaw that has the best power-to-weight ratio in the chainsaw market. The large bar increases the cutting capacity by 12% whereas the excellent cooling and heavy-duty filtration system will offer better endurance and performance. A chainsaw unlike any other, this chainsaw is built to deliver and last long.

What is the oldest chainsaw brand?

Stihl is believed to be the oldest chainsaw manufacturer in the world, as it released its first electro-chainsaw back in 1926.

When was the first chainsaw used for cutting wood?

Were chainsaws used in WW2?

Chainsaws were invaluable to both sides in World War II, but they didn’t resemble the modern chainsaws that are sold in the market today. The chainsaws of the period were two-man machines, and they were used by the Wehrmacht for building field fortifications. They also played a key role in increasing timber production from the US war effort.

What is the most powerful chainsaw to have been made?

The MS 881 is believed to be the most powerful chainsaw in the market, and it comes with the highest displacement (121.6 cc) and engine power (6.4 kW).

ALSO READ: Which Way Does Chain Go On Chainsaw?

ALSO READ: Why Does My Chainsaw Cut Crooked?